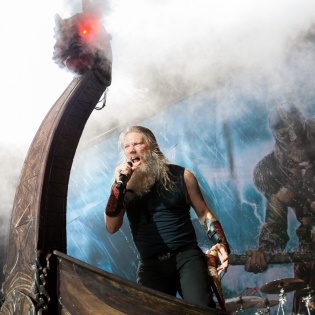 The new offering is produced by veteran Deftones producer Terry Date, who was behind much of the band’s early and notable work: Adrenaline (1995), Around the Fur (1997), White Pony (2000), Deftones (2003), amongst a number of heavy-hitting records by Smashing Pumpkins, Slipknot, Incubus, Pantera, White Zombie, Soundgarden, Dredg, and even Snoop Dogg.

The vocal performance by Chino Moreno brings a very recognizable Deftones feel to “Ohms”, while the music itself has a more exploratory, bluesy, and almost (almost) light-hearted attack… maybe reminiscent of the band HUM in its final 50 seconds.

There is certainly a different vibe to the new material – something uplifting and almost playful. Certainly less intense. Depth-wise, “Ohms” is a bit more on the surface (musically) compared to prior releases. Strangely, the 7-string sound that normally resonates from guitarist Stephen Carpenter is noticeably absent, which is not necessarily a negative thing. It’s just odd to hear a Deftones song that sounds as if a standard 6-string axe could do the job.

Does it “wow”? In our humble opinion, maybe not. Is it “Deftones”? Mostly. Is it a good track? Yes. However, considering this is one of only ten tracks on the upcoming September release, we have to wonder: what else is on the way? Because as enjoyable as “Ohms” might be, the song is lacking the ‘knock-you-on-your-ass’ (either emotionally or energetically) approach that we’ve come to know and love from this band. That opinion alone puts a lot of pressure on the remaining nine songs to fill the “Deftones” craving. But that’s all this really is… an opinion.

Either way, new Deftones music is a much needed thing in the year 2020. We’re very happy it has arrived, even if it doesn’t make us feel as riled up or as reflective as we’d like to feel.

Hear the song, view the video, and form your own opinion. What do you think?