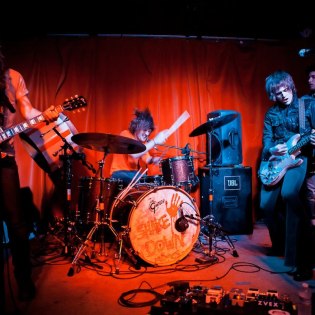 The Darkness and Foxy Shazam – Sold Out @ The Fillmore – San Francisco, CA.

ARE WE READY?!?  On the eve of February 21, 2012, The Fillmore, San Francisco CA., THERE WAS ROCK N ROLL. The Darkness has returned for a SOLD OUT North American tour after a 6 year band hiatus, joined by the astounding Foxy Shazam…

The days of bands knowing how to set fire to their stage, put on an inconceivable live show and have their crowds bewildered, overwhelmed, captured and completely encompassed by the purest form of rock n’ roll entertainment have been sadly foreign in today’s live shows.  I have my theories of why this is, I’m sure you have yours…bottom line for me, it totally sucks and I miss huge rock n’ roll. Big shows, big lights, big theatrical entertainment, larger than life ROCK GODS, sexy siring guitars licks that slice your chest wide open and the ROAR of a crowd that doesn’t know what the fuck just hit ‘em.

Foxy Shazam was an amazing fit to this tour and added a complete one/two punch to the festivities. They have certainly stepped up their game over the last couple years and with Justin Hawkins (The Darkenss) producing their last album (The Church of Rock n’ Roll), Foxy has certainly exploded as a rock n roll force to be reckoned with. They were unbelievable and rumor has it they will be retuning to SF for a headling tour sometime around March, DO NOT MISS IT.

And now: THE DARKNESS, simply METEORIC, returning as if they never left. During a 6 yr hiatus, they’ve gone back to the woodshed, sharpened their already knifelike live skills, kicked some drugs and have returned as one of the best rock shows I’ve EVER attended. With a 20 song live set that ranged from previous to yet unreleased material, the music lunged you into this crazy circus that just rolled into town.  Everything that I mentioned above was in full force, screaming in your face while on a rollercoaster of live music adventure. All I’ve been thirsting for, everything I’ve wanted to witness for the LONGEST TIME was finally here. It was like a roaring fire in my chest that was fueled by my eyes and ears. It’s simply an indulgence, an indulgence of theatrical rock entertainment. By no means am I calling The Darkness rock gods, but they’re certainly on the fastest track to being added to the book if they maintain this caliber. They very well may be the shot in the weary veins that this world of live rock music desperately needs in 2012.

To all the boring colorless “artists” that are desperately failing, trying to make their wearisome way to becoming a substantial existence in this piss poor state of live music that’s plaguing us all around, go see The Darkness and take some fucking notes.

5. GET YOUR HANDS OFF MY WOMAN

6. Out of This World

8. Love Is Only a Feeling

18. I Believe In a Thing Called Love