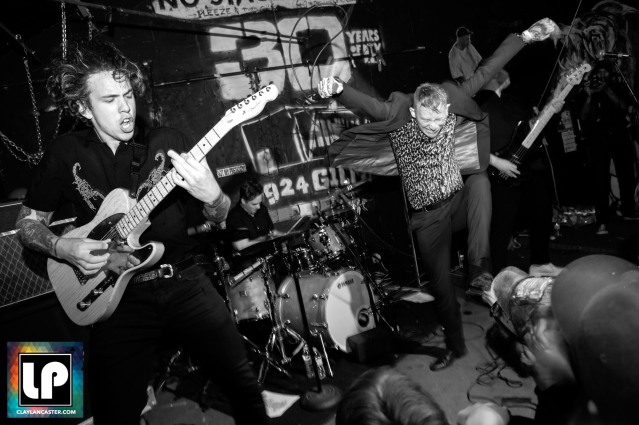 Frank Carter and the Rattlesnakes moved through the San Francisco Bay Area on Saturday, setting the pace for their US run of shows to support their newest release Modern Ruin. The former Gallows frontman greeted the crowd at legendary punk venue 924 Gilman in Berkeley with explosive energy, not letting up for the duration of their set.

Clad in a blue suit, Carter came out swinging with “Primary Explosive”, “Trouble”, and “Juggernaut”…all from their debut effort Blossom. The heavy, head-banging riffs commanded the Gilman patrons immediately and got the crowd slamming into each other with passion and energy, virtually equal to Carter and Co. on stage.

Dean Richardson performs with Frank Carter & the Rattlesnakes at 924 Gilman

The band then switched gears and built the middle of their stage time around the newer tracks. Songs like “Vampires” and their newest single “Lullaby” were performed with equal passion, while still being on the more pop-rock side of the spectrum than their earlier work. Although a slight departure from their debut material, the 924 Gilman audience pumped their fists, shoved into each other, and shouted alongside Carter for all of it.

Berkeley was the second stop for Frank Carter & the Rattlesnakes on the U.S. leg of their 2017 tour, which began in Los Angeles and will continue until May 20th in Columbus, OH before headed to Germany. Setlist for Gilman below.