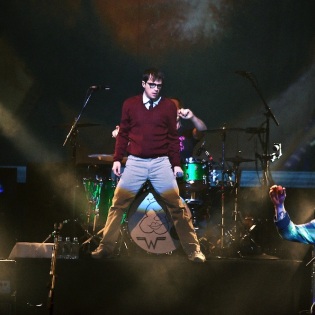 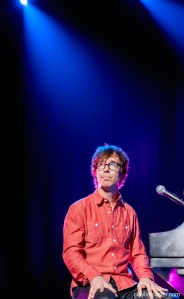 Piano-pop composer Ben Folds will drop So There on September 11th, and it will be his newest batch of studio tunes since Ben Folds Five’s 2012 release The Sounds of the Life of the Mind.

So There is his first collaboration with the yMusic Ensemble (in a style dubbed “Chamber Pop”), and also features three concertos performed live with the Nashville Symphony.

Right off the bat, it is apparent that this new offering is caked in sincerity. Folds’ trademark wit and attack are still present, but the tunes are certainly crafted in a way that means business. A noticeable lack of the goofiness element, which is something fans have come to expect to varying degrees in a Ben Folds project.

“Capable of Anything”–an upbeat, hopeful, driving number–sets the tone for what’s to come… just in more of a pop dressing than the other tracks. Minus perhaps “Phone in a Pool”.

“Not a Fan” is a beautiful chamber waltz that takes its place among previous Folds waltzes like “Boxing” or “Thank You for Breaking My Heart”. It’s also the only waltz I’m aware of that includes terms like “boy band”, “fan girl”, and “cereal” in the lyrics. There’s also a “fuck you” in there as well.

Ok, maybe the goofiness is still there after all.

The arrangements are cleverly thought out, even in the backing vocals. “Long Way to Go” demonstrates this well with the chamber voices behaving more like instruments. Woodwinds and violins rise and fall behind Folds’ voice and tickling piano in “So There”, and fun vocal harmony layering saturates “Yes Man”… supported by the string section and subtle horns.

In perhaps the most Folds-y of ways, “F10-D-A” is basically an instrumental with a choir of voices narrating every chord change. Like, literally narrating it. If they go to a C or a Bb, they’ll tell you about it. A clever little tune, and reminds me of my high school choir director when he would run through some of our pieces with us.

“I’m Not the Man” is a rather emotionally hitting, self-reflective song about choices, paths, learning, and change.

The end of So There is made up of three beautifully-orchestrated concertos. Here, Ben is joined by the Nashville Symphony. And although some of his pop writing style leaks out in phrases once in a while, these pieces are perhaps the most “formal” works I’ve ever heard from Mr. Folds. Very intriguing, and hopefully will draw public attention to classical music and musicianship… a feat that Ben has been working at for a while now.

Bottom Line: Still witty, still poppy, still Folds-y. Sincere but not heavy. And a trio of ending pieces that highlight Folds’ incredible talent in a light most of us aren’t used to yet. I doubt we’ll ever see him leave the pop world, but he has definitely shown us that he has the capability to.

Notable tracks: “Phone in a Pool”, “I’m Not the Man”, “Concerto for Piano and Orchestra, Movement 3”

Tagged as: 2015, ben folds, chamber pop, concerto, so there, yMusic