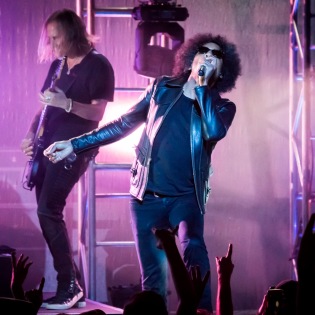 Like Michael Jackson or Prince before them, Bad Rabbits is seemingly on track to win over fans in multiple arenas of music. Upon first listen, the music is blatantly in the R&B or Soul categories. But dig a little deeper and you’ll find rock, funk, or even New Jack Swing influences.

In 2008 Bad Rabbits hit the scene with a self-titled EP that sounded like modern-day Bobby Brown… or anything that Teddy Riley put his hands on in the early 90’s. It was slick, with big beats, soulful vocals, funky synths, and some damn good grooves. Not only did their crowds grow at home, but (despite the genre differences) the band garnered attention from the hardcore/punk crowds on Warped Tour as well as landing a touring spot with alt-punk band Taking Back Sunday.

So, after four years of waiting, how does American Love stack up?

It’s awesome. Much more refined than the earlier EP. We have some layered song structures, aggressive vocals, big beats… the works. As well as elements of humor.

The only track I’d maybe skip is “Take It Off”, as it repeats a little too often for my taste. But highlights certainly include “We Can Roll”, “Dirty”, and “Dance Moves.”

If you longed for an updated revisit of the New Jack Swing era like Bobby Brown, Bel Biv Devoe, or New Edition, then go purchase American Love right now. Right now. Do it.

Bottom Line: Beats and energy for days. This won’t leave your car stereo this summer.

Be sure to catch one of their crazy live shows this summer!