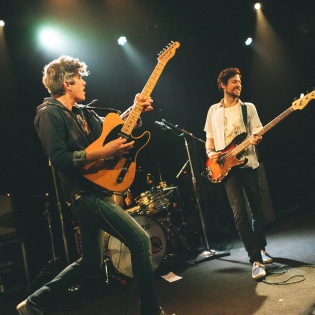 Celebrating its eleventh year of raising funds and awareness to non-profit organizations, Sub City (Hopeless Records’ 501c3 non-profit organization, which has raised more than two million dollars for charity), is pleased to announce the 2013 edition of the Sub City Take Action Tour featuring The Used. This year the tour will be benefiting the It Gets Better Project, a national organization created to show young LGBT people the levels of happiness, potential, and positivity their lives will reach – if they can just get through their teen years. The It Gets Better Project wants to remind teenagers going through tough times that they are not alone – and it WILL get better.

The tour will feature alt-rock headliner, The Used, with support from We Came As Romans, Crown The Empire, and MindFlow. Kicking off at Las Vegas’ House of Blues on January 11th, the annual nationwide charity tour will circle the US through February, showcasing some of the best bands in music today while raising funds and awareness for It Gets Better and the concept that we can all help play a part in making a positive impact. Ten percent of the cost of each ticket purchased will be donated to It Gets Better and Sub City. The 2011 Take Action Tour raised nearly $50,000 to help further the mission of the non-profit, SEX, ETC., with over 19,000 fans attending the 30-stop city tour. Previous benefitting charities of the Sub City Take Action Tour also include Driving For Donors, Do Something, America’s Youth Hotline, ReachOut.com and The National Hopeline Network. To date, Sub City and the Take Action Tour have donated over 2 million dollars to over 50 non-profit organizations.

Bert and Jeph from The Used have created an It Gets Better video to help support the cause. Fans can view the video HERE.

“It’s our privilege to work with such a lovely charity that does so much good in this confusing world. Please check out itgetsbetter.org and we’ll see you on the Take Action Tour,” says The Used frontman, Bert McCracken.

We Came As Romans’ guitarist/lyricist, Joshua Moore, also tells us, “We’re excited to be back touring in the US after three months. Though it’s fun to do international tours, there’s nothing like touring our own country, especially with such a well respected band like The Used, who a lot of our band grew up listening to, and on such a renowned annual tour. We can’t wait!”

In addition, Hopeless Records, in partner with their non- profit organization Sub City, presents Take Action Compilation Volume 11, a compilation album for charity. This year features two CDs full of unreleased and exclusive tracks from The Used, Bad Religion, AWOL Nation, All Time Low, 3OH!3 and many more. 5% of the suggested retail price from the sale of this compilation will go to continue to fulfill Sub City’s mission to connect bands, fans and causes they are passionate about. For the most current donation total and full list of charities benefiting from this and other Sub City releases, please visit: SubCity.net.

Selling over 3 million albums worldwide in the span of their career, The Used released their highly anticipated album “Vulnerable” earlier this year on their own label, Anger Music Group partnered with Hopeless Records. The album has sold over 70k copies to date and continues to climb. The band will headline the Take Action Tour benefitting ItGetsBetterProject, a cause they are extremely passionate about.

The band is also excited to announce the release of Vulnerable II- a 2 disc re- issue of the highly successful 2012 release Vulnerable that includes the 12 original tracks, 4 brand new songs, 3 acoustic versions and 3 remixes. Vulnerable II will be released January 22, 2013.

Tagged as: Crown the Empire, It Gets Better, MindFlow, Take Action Tour, The Used, We Came As Romans