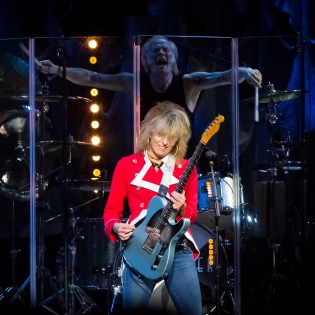 The visionary Los Angeles band Bad Religion has entered the studio to begin recording a brand new album. The yet unnamed work is being recorded at Joe Barresi’s JHOC studio and co-produced by band members Brett Gurewitz, Greg Graffin and Barresi.

The group reconvenes amidst a period of heightened activity. Singer-songwriter Greg Graffin is preparing for his second year of teaching evolution at Cornell University and is writing a new book “Population Wars” for St. Martins Press. Guitarist-songwriter Brett Gurewitz continues to shepherd his labels Epitaph and Anti- and recently received a prestigious Independent Spirit Award. Drummer Brooks Wackerman has been touring with Tenacious D and released a record by his band Kidneys. Throughout it all, the iconic band has performed throughout the world and appeared at the historic Reason Rally in Washington DC.

Formed in the suburbs of Los Angeles as disaffected teenagers, Bad Religion has generated numerous memorable hits and become synonymous with intelligent and provocative hook filled punk rock. This will be their 16th full length album.