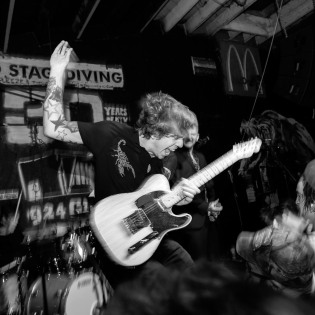 Primus in Troutdale, OR – 2022
Featured Articles

B’z have announced they will be releasing a 5-song album in English on July 25th, 2012 exclusively through iTunes.

The self-titled album includes the newly released single, “Into Free-Dangan-“ featured in the video game, Dragon’s Dogma and has sold over a million units worldwide.  The opening track of the album, “Love Bomb” was originally titled “Ai no Bakudan” and was a number one hit in Japan for B’z in 2005. All of the songs on the forthcoming album have been re-produced with English lyrics to coincide with B’z upcoming North American tour, beginning at the Warfield in San Francisco on September 17th.

Formed in 1988, B’z are guitarist Tak Matsumoto and vocalist, Koshi Inaba.  Over the span of twenty-four years, B’z have released 18 albums, and 50 singles, with 46 of those singles consecutively debuting #1 on Japan’s Oricon Single Chart. B’z have sold over 80 million CDs in Japan alone, making them the best-selling artist in Japan’s history.

“This will be our 4th US tour,” says B’z guitarist Tak Matsumoto. “We have always loved playing here, and felt it was time to release some English songs for the American audience.” As a world acclaimed six-string virtuoso, Tak joined legendary guitarists Jimmy Page, Joe Perry, Ace Frehley and Slash, to become the fifth guitarist in the world to have his own Gibson signature model guitar. Currently his model, the ‘Tak Matsumoto DC Custom Ebony” is available worldwide.