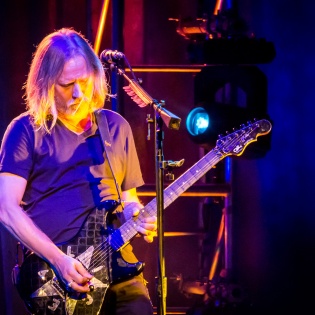 Off from a hiatus (a result of their failed feature film attempt, apparently), Tenacious D is back with their third offering titled Rize of the Fenix.

Upon first listen, D fans will notice that the style of songwriting is a bit more similar to their debut record. The songs are epic, full-sounding, hilarious, and (most importantly) rockin’. Dave Grohl again sits behind the drum kit for this one, which I’m sure contributes to the huge sound.

Fans will also notice that the skits are back! There’s only a couple, but I forgot how much I missed them. The last D album (2006’s The Pick of Destiny) served both as a stand-alone body of work as well as the soundtrack to their film of the same name… so there were no skits. I have to say, “Flutes and Trombones” is just as funny as any on their first record.

The D are back in fine form, and fans will love this new addition to the catalog. My only complaint: it’s too short. 13 tracks sounds nice, but 2 of those are skits, and 3 more of the songs don’t even crack the 2-minute mark. I love “To Be the Best” and all of it’s 80s-montage glory, but it sounds like the song ends right when it should be busting out into full rock n’ roll. I wonder who made that decision.

But dude, seriously… check it out when it hits stores on May 15th.

Bottom line: The world’s best band is certainly back with a vengeance. But there’s a penalty for short-play. May wanna grab those bonus tracks “5 Needs”, “Quantum Leap” and “Rivers of Brown”.