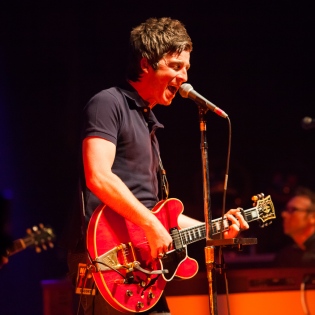 Radiohead – The King of Limbs

So for those of us Radiohead fans that count the days between new releases, today was quite a shock. In fact, we’ve had a few shocks this week.

Everyone’s caught up by now: Radiohead randomly announced this past Monday that their new record (the follow-up to 2008’s ‘In Rainbows’) would be out this Saturday (Feb. 19th) and titled ‘The King of Limbs’.

Then I awoke this morning to a Twitter message from @radiohead, saying “It’s Friday… It’s almost the weekend…You can download ‘The King of Limbs’ now if you so wish!”

They topped their previous “surprise!” with “umm… surprise first!”.

I won’t go into track-by-track analogy. You can go listen for yourself at that point. I’m here to give my opinion of the overall record… which is as follows:

The new Radiohead album is very good, and I enjoyed it from front to back. However in comparison to previous releases, it feels more like a collection of B-Sides than a full new record. It has that very chill-out vibe, and sounds like what you’d imagine ‘In Rainbows’ mixed with ‘Amnesiac’ to sound like…

Watching the rain outside my windows this morning, I slapped some headphones on and listened to this new record in its entirety. It was perfect mood music, and I started getting lost in all the little recording intricacies that Radiohead records are known for. It has a more fresh, focused, and lighter feel than ‘Amnesiac’, but stays more reserved than ‘In Rainbows’.

But no climaxes, no real craziness, and 8 tracks… it makes me wonder if there’s a ‘Part II’ in the works. Something feels a tad incomplete. Maybe I’m just used to feeling ravaged by the end of a RH album.

I gotta say though, it made me want another go-around. So there’s obviously something there.

Oh, and on a side note: watching Thom dance his ass of in the music video for “Lotus Flower” is alone worth the price of admission.